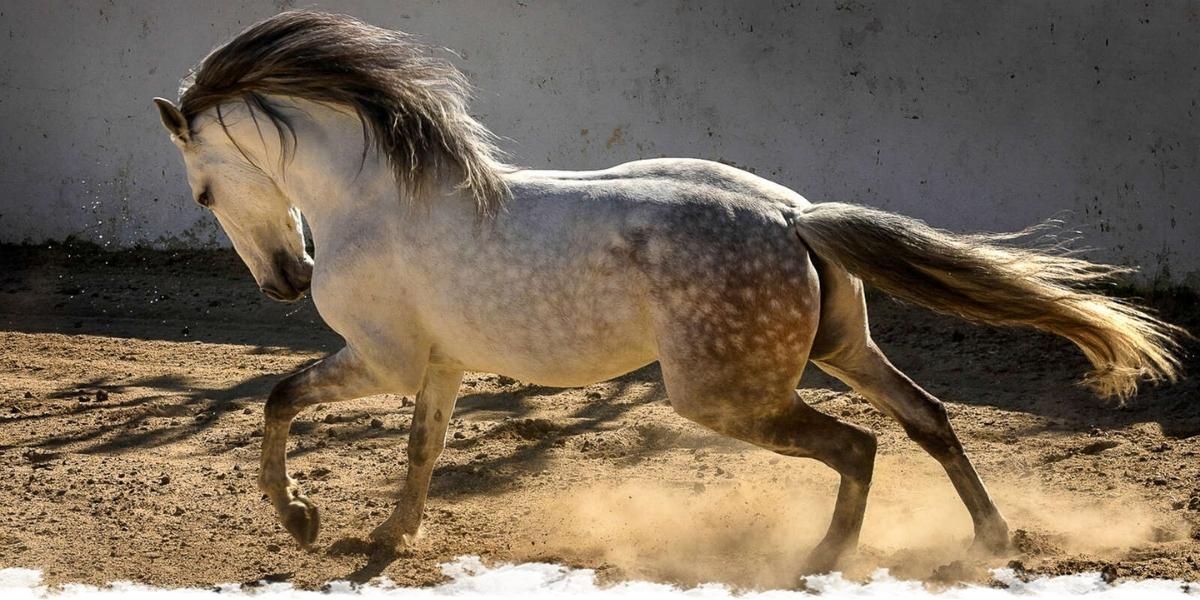 The Lusitano is one of the oldest saddle horses in the world and a guest favourite on our riding holidays in Portugal.
To understand the breed, and the devotion of the Portuguese for this horse, one must grasp how the history of the land, the people and the horse are intertwined. In this blog post we will highlight some meaningful chapters of this breed’s history that helped shape Portugal, and discover the “New World”.

Origins of the Lusitano

Portugal is located in the far west coast of the Iberian Peninsula: an area that has historically been isolated from the rest of the world, primarily due to its geographical disposition. This allowed the horses to develop and evolve nearly fully without outside influences for around 15 000 years.
Drawings of horses with remarkable similarities to the modern Lusitano were found on the Escoural Caves of Alentejo, in Portugal, and further research leads experts to believe they date back to 1700 BC.
By 800 BC, the horses from the Iberian Peninsula were the preferred warhorses of the Romans, so much so that they established stud farms of their own to provide mounts to their military campaigns.
Portugal became a country on the 24th of June 1128, the date of the Battle of São Mamede. Afonso I proclaimed himself Prince of Portugal and shortly became King. The Iberian horse was consequently nominated the “Royal Horse of Portugal”. Later on, it also became the star of the Baroque age, favoured by most European kings and generals who saw their military potential.
Later on, during the reign of Philip III of Portugal (also Philip IV of Spain), Portuguese horse breeding reached its lowest point. The Spanish passed laws to halt the country's production of cavalry horses, and the stud farms that existed in Portugal were run in secrecy, with horses smuggled or stolen from Spain. These secret farms, however, provided the base for the modern Lusitano.
In 1989, the APSL (Portuguese association of breeders of Pure Blood Lusitanos) was created. All the existing pedigrees were entered into the APSL system and the stud book was closed.

The Lusitano is not a typically large horse, standing on average at 15-16 hands. Its head is well proportioned, of medium length, slender, with a slightly sub convex profile and a slightly domed forehead. His eyes are lively, and confident. The ears are of medium length –fine and expressive. The neck is also of medium length, with a deep and muscular chest. The side is well developed: extensive and deep with arched ribs. These horses come in a wide variety of solid colours the most common being gray, and bay.
Overall, Lusitanos are known for their endearing personality. They are quite gentle and friendly creatures which make them a good match for riders of any level. As they are a versatile breed, you can spot them across multiple disciplines; however dressage is the one where they tend to stand out the most. They are very frequently used on our trail riding holidays in Portugal and of course, on dressage holidays as well!

The early partnership between the Iberian human and horse was celebrated in sculptures, paintings, and literature dating back to the 8th century. Legend has it that this bond between the Iberian horse and rider was the initial inspiration for the Greek legend of the Centaurs, the mythological creature that portrays the combination of the human and horse as one single creature.
Discover more about this ancient breed and how they thrive in the Portuguese countryside on one of our riding holidays. Please check the “Portugal” tab on our website to find out more about the horseback experiences that we offer.

You may also enjoy reading: