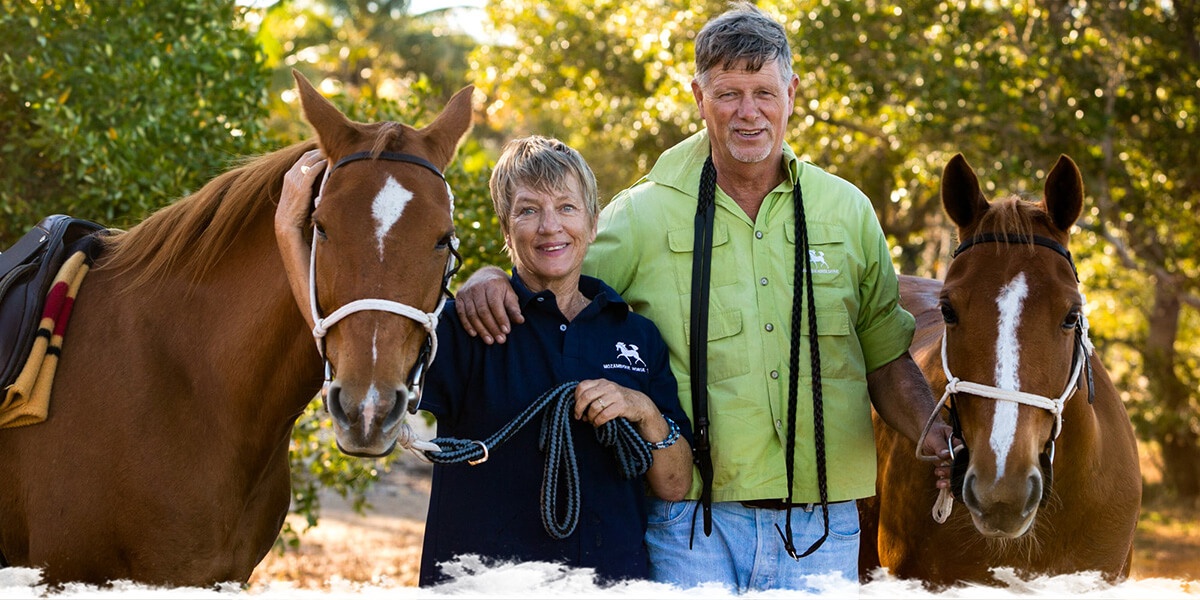 Meet the guides… Pat and Mandy Retzlaff in Mozambique

There are certain people who seem to have lived many lives, all wrapped up in one. People with endless stories that will leave you feeling an array of emotions. Patrick and Amanda Retzlaff are such people. Now proud owners of Mozambique Horse Safari on the pristine Mozambican coastline, theirs is a fascinating and emotional narrative indeed.

Pat’s story began in Tanzania – more specifically Arusha, in the foothills of the Kilimanjaro, where he was born. He grew up in Rhodesia (today's Zimbabwe) before briefly moving to South Africa to study Animal Science. His future wife Mandy was born in Ghana, and with her English parents, moved to Rhodesia in her early years.
The pair met in South Africa, and together made a home in the country then known as Zimbabwe, in the early 80s. For many years, they led a successful life commercially farming tomatoes and paprika and started building a family of their own - three children, with the addition of a lovely string of horses that they rode around the farm.
If you are familiar with the history of Rhodesia/Zimbabwe in the early 2000’s, you will have a relatively good notion of what was to happen next. At that time, Robert Mugabe’s government pushed a land reform programme, aimed at seizing the lands from white farmers so they could go to the majority black population. What followed was a state of violent turmoil and Pat and Mandy’s seemingly idyllic life was turned upside down in the most dramatic ways.  Mandy puts it in better words than I ever could in their memoirs, “104 horses” - more on this below.
‘A letter is handed to you. In broken English, it tells you that you must now vacate your farm; that this is no longer your home, for it now belongs to the crowd on your doorstep. Then the drums begin to beat.’  (taken from “104 horses”)

Pat and Mandy saw their home seized with little to no notice. Mandy's memoirs are a heartbreaking glimpse into what it would feel like to have to leave your home, your belongings, your treasured memories - everything - behind. As they were forced to flee, they managed to gather a string of over 100 horses (!) rescued from farms and trusted upon them by neighbours who had decided to go overseas. Not ready to leave their country, Pat and Mandy fled from farm to farm, finding land for their horses wherever they could and relying on the solidarity of their friends and fellow farmers.
As the situation worsened and facing eviction after eviction, the Retzlaffs eventually found refuge in Mozambique – and there was absolutely no doubt they would bring their horses along. With no income and plenty of horses to feed, they had to think on their feet and come up with a plan.

It took a few years, some heartbreaking moments and a devastating cyclone, but with courage and determination they eventually established Mozambique Horse Safari in 2006 - please do read Mandy’s book “104 horses”, a fantastic, albeit emotionally harrowing, page turner. Today, Pat and Mandy operate fabulous trail rides along the Mozambican coastline and on Benguerra Island. We look forward to helping you experience life on safari with Pat and Mandy – you are in for a treat!
“We had an absolute marvelous time in Mozambique with the Retzlaffs.  The rides were varied, challenging and took us through different parts of their world.  You know you are up for an adventure when you land on a cracked up air strip. The food was divine and Mandy kept us super busy with arts and crafts, stories that one can only tell around a camp fire and lovely introductions to their life in Vilanculos. I have never seen horsemanship and safety being done as well outside a pro-stable.  Pat runs the crew with tight reins and we got checked, double checked and triple checked before heading out.  The tack is cared for as it would be in an Olympic show stable. It was a wonderful ending to our trip and we were sad to leave.”
Feedback from Equus guest Patrik, who visited in 2019.

A FEW QUESTIONS WITH PAT AND MANDY

Our riding holidays in Mozambique

Mozambique is a hidden treasure with its large beaches of white sand and blue coral lagoons. With Equus Journeys, you can enjoy this tropical paradise from horseback where the water temperature never drops below 23°c and the horses go swimming voluntarily! Every day is a new riding adventure that will see you canter along pristine beaches, explore the local fishing villages and sand dunes, and the chance to discover beautiful Benguerra island in the Bazaruto archipelago.
Other durations can be arranged on request.

You may also enjoy reading