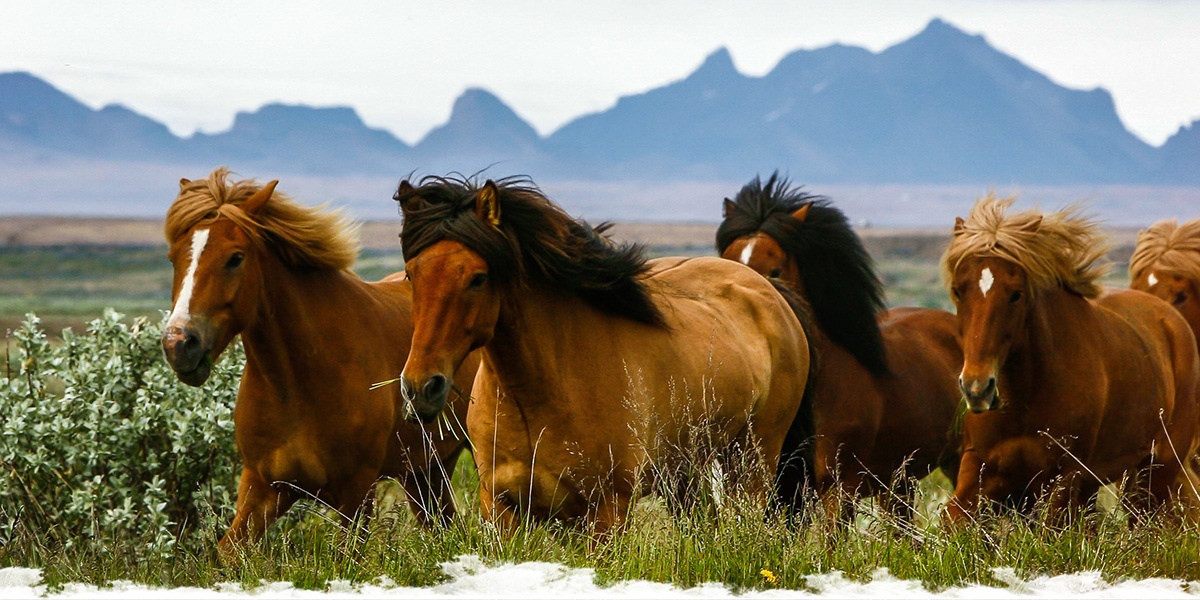 The Icelandic horse breed holds a very special place in the Icelander's hearts and souls. When riding these horses in Iceland, you will surely understand why it is considered to be one of the most curious, intelligent and independent horses in the world.
The Icelandic horse is a unique breed of small horses - but do not call them ponies, or fear the wrath of the Iceland horse lovers! It came to the volcanic island of Iceland with the very first settlers, about 1100 years ago. Over the years, they have remained a loyal friend to the Icelandic people and have also played an important roll in the development of the island. The "Icelandic", as it is commonly referred to, is known for being sure-footed and able to cross rough terrain. It displays five gaits: the walk, trot and canter are the three gaits they have in common with other breeds, but the tölt and flying pace are quite unique to this species.
"The Icelandic horse is the manifestation of Icelandic nature; authentic, pure, powerful and free" (https://www.horsesoficeland.is/)

The first Icelandic horses are believed to have arrived aboard the Viking ships of the Norse settlers between the 9th and 10th centuries. The Icelandic horse is not just one of the oldest breeds in the world, but it has also remained as pure as it can be. In 982 AD, the Icelandic parliament passed laws prohibiting any importation of other horse breeds into the country. As a result, the breed has been isolated for over a thousand years. Moreover, once an Icelandic has been exported, it will never be able to be reimported back to Iceland. The Icelandic horses have had no contact with other equine species and are not vaccinated. They do not have any resistance to diseases which are common elsewhere in the world and therefore, there are some important packing considerations for a riding holiday in Iceland such as disinfecting your riding gear to prevent the spread of infections.
The Icelandic has played a vital role in the land of fire and ice very early in its history. Horses were very highly regarded in Norse mythology, and they played a big part in mythological literature, poetry and folklore.
For many years, the horse was the only means of transportation in Iceland, as well as being the most important working animal in the fields before the advent of machinery. When the first automobiles arrived on the island in 1904, the horses became less essential. However, a small group of people created that same year the first horse breeding association in order to protect the breed from ever being forgotten.
Today, there are about 80,000 horses in Iceland! Horseback riding is almost part of the Icelander's culture and thousands of inhabitants regularly enjoy riding. Several important events and riding competitions are held all year round,  but one of the most famous traditions is the annual round-up. Every year in September,  local farmers and visitors hop in the saddle and head to the highlands to herd the sheep across rivers and sheltered valleys.

The Icelandic horse is intelligent, even-tempered, and versatile. As many as 40 coat colours can be found, with more than 100  variations. It is believed among Icelanders that the horses' coat colour reflects its personality. In fact, most of the Icelandic horses' names refer to their colour: Bleikur (pink),
Grani (Grey) or Kolfaxi (black-mane). Other names refer to their temperament and personality, for example, Farfus (likes to travel) or Prakkari (trickster). It is commonly believed that you should never ride a horse whose name you don't know or understand. When understanding their name you understand their nature so, before getting in the saddle, be sure to ask your local guide what your horse's name means!
Another interesting fact about Icelandic horses is their small size (but they are still considered to be horses... They are not ponies!). Even though they normally average between 12-13 hands, they are still a very strong, sturdy, and forward-going breed. They are usually quite calm but with their own personality and possibly a bit cheeky! Owing to the fact that they have never had to face predators in their natural environment, there are not easily spooked and you might find them to be very approachable and friendly.

The five gaits and special tack

Walk: Four-beat gait. The horse is relaxed, but moves ahead briskly, putting each foot down independently.
Trot: Two-beat gait. Front and hind legs on opposite sides move together. It is useful to work the horse's balance and to establish a smooth working rhythm with the rider.
Canter/Gallop: Three-beat gait ridden at various speeds. A slow canter is comfortable for riding and a fast gallop is great fun for both horse and rider!
Tölt: Remarkably smooth four-beat gait. The horse moves its feet in the same order as in the walk. When tölting, the hind legs move well and briskly under the body, making it one of the most comfortable gaits. It also allows the horse to cover long distances without getting tired. Horse enthusiasts around the world agree that no other horse can manage this gait as naturally as the Icelandic horse since it is not trained, but rather a natural behaviour from the breed.
Flying Pace/Pace: Two-beat gait. The horse moves both legs on the same side together. Icelandic horses that can manage this gait are used for racing, an old and popular equestrian sport in Iceland. Not all of the horses from this breed can pace, so those that do are considered to be the best of the breed.
It is also important to mention that the Icelandic horses are usually ridden with tack designed especially for the breed. The most common tack consists of a simple bridle with a regular snaffle bit and an Icelandic saddle (similar to dressage saddles). Saddle pads are not common.

It is said that a traveller might not have fully experienced the beauty of Iceland if not having witnessed it from a horse's back. Riding in Iceland is an excellent opportunity to get off the road and really explore the land of ice and fire. You will have the chance to explore the mountains and cross beautiful glacial rivers. It is a once-in-a-lifetime opportunity to fly or tölt through the Icelandic scenery and discover the land in the same way as the Norsemen once did.

Iceland horses have a "naming committee" that intends to protect the Icelandic language by up keeping and introducing given names in Icelandic horses. This means that in Iceland, you can't name your horse "Cupcake" or "Sprinkles" like any other pet, but you must rather give them a name approved by the committee reflecting great respect to the breed.

For more information about our riding holidays in Iceland visit our website: Equus Journeys
Or you can also contact us directly at info@equus-journeys.com or give us a call on +44 (0)1905 388 977